Recyclable bioplastics cooled down, cooked up in CSU chem lab

Compostable cutlery and other products made from the biomaterial PLA are biodegradable, but not fully recyclable. In a recent paper, CSU researchers have reported a breakthrough in recyclable polymers, which can be transformed back into their original molecular states using heat. Their breakthrough could lead to truly recyclable plastics.

The textbooks and journals said it couldn’t be done.

The innovation is from the lab of Eugene Chen, professor of chemistry and recent recipient of the Presidential Green Chemistry Challenge award. Publishing in Nature Chemistry Nov. 23, Chen and postdoctoral fellow Miao Hong describe synthesizing a polyester that, when simply reheated for an hour, converts back to its original molecular state, ready for reuse. 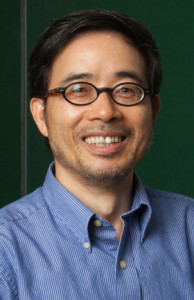 Recyclable, in the purest sense of the word.

Their starting feedstock was a biorenewable monomer that textbooks and journal papers had declared non-polymerizable, or could not be bonded into large molecules – polymers – typically required for use as a material.

Plastics are the most common type of manmade polymer, which is the chemical term for a long chain of repeating small molecules, or monomers. Plastics like polyethylene and polystyrene are king among synthetic polymers, and have come under fire for piling up in landfills. Chen’s lab is focused on making renewable and degradable plastics and other polymers to replace conventional petroleum-based materials. 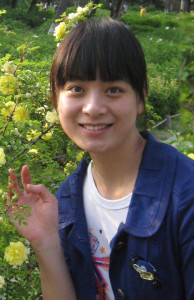 There are several biodegradable plastics on the market today, chief among them a starch-based material made from polylactic acid, or PLA. Compostable cups, cutlery and packaging in dining halls are made from PLA. They’re biodegradable, yes, but they’re not truly recyclable – once made, they can’t be completely reconstituted into their original monomeric states without forming other, unwanted byproducts.

And what about those little numbers on the bottoms of plastic containers? Doesn’t that mean “recyclable”? Sort of. Soda bottles, computer keyboards and millions of other plastics can be repurposed to extend their product lifecycle. But in the true, chemical sense of “recyclability” – biomolecules that can be synthesized into a useful material, and then completely converted back to the same molecules simply by heating the bulk material – is unheard of. Until now.

‘Don’t even bother with this monomer’

The researchers’ starting monomer is a mouthful for being such a small molecule: Gamma-butyrolactone, or GBL. It is a colorless liquid and common chemical reagent, derived from a top-12 biomass compound best suited to replace petrochemicals, according to the Department of Energy.

Textbooks and scientific literature had described these small molecules as too happy and thermally stable in their monomeric chemical states to polymerize. 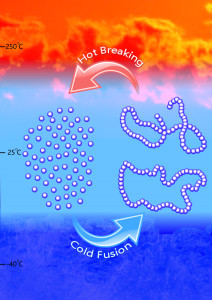 A graphical illustration of the researchers’ polymer synthesis process. The single molecules, or monomers, are cooled in order to polymerize; to cycle back, heat is applied. Credit: Jing Tang/Chen lab

“’Don’t even bother with this monomer,’” Chen summarized the conventional wisdom. “‘You cannot make a polymer out of it because the measured reaction thermodynamics told you so.’ We suspected that some of the previous reports were probably incorrect.”

Not only did they make a polymer, Chen and Hong figured out how to get the polymers to take different shapes, such as linear or cyclic, based on the catalysts and conditions they selected. For their experiments, they used both metal-based and metal-free catalysts to synthesize the polymer, called poly(GBL), which is chemically equivalent to a commercial biomaterial called poly(4-hydroxybutyrate), or P4HB.

They employed specifically designed reaction conditions, including low temperature, to make the polymer and heat between 220-300 degrees Celsius to convert the polymer back into the original monomer, demonstrating the thermal recyclability of the polymer.

P4HB is derived from bacteria, which is a more expensive, complex process than how most plastics are made. By starting with the readily available GBL and ending up with a replacement material for P4HB, Chen’s discovery has promising market potential, and a provisional patent has been filed with the help of CSU Ventures.

“In my 15 years at CSU, I would probably call this my group’s most exciting piece of work,” Chen said. “This work creates a class of truly sustainable biopolymers, as they are both biorenewable and recyclable, based on a bioderived monomer previously declared non-polymerizable.”